sign up
A Baroque masterpiece known as Britain's 'Sistine Chapel'

The Painted Hall boasts one of the most spectacular Baroque interiors in Europe. The incredible ceiling and wall decorations were conceived and executed by British artist Sir James Thornhill.

The epic painting scheme, known as ‘Britain’s Sistine Chapel’ took nineteen years from the start of the commission to its completion in 1726. By turns extravagant, playful, thoughtful, naïve and politically shrewd, Thornhill’s scheme earned him a knighthood and payment of £6,685.

Thornhill used a variety of techniques such as trompe l’oeil (‘trick the eye’) and chiaroscuro (contrast of light and dark) to enliven his paintings. His use of illusionistic architecture and steep perspective was inspired by Italian baroque painting.

The many lives of the Painted Hall

The grandeur of the composition, which covers 40,000 square feet, reflects the importance of the new Royal Hospital’s main Hall. Originally intended as a grand dining room for the naval pensioners, it soon became a ceremonial space open to paying visitors and reserved for special functions.

Perhaps the most significant function was the lying-in-state of Lord Nelson in January 1806 drawing large crowds to view the hero’s body. The exact spot where the coffin lay is marked by a plaque on the floor. 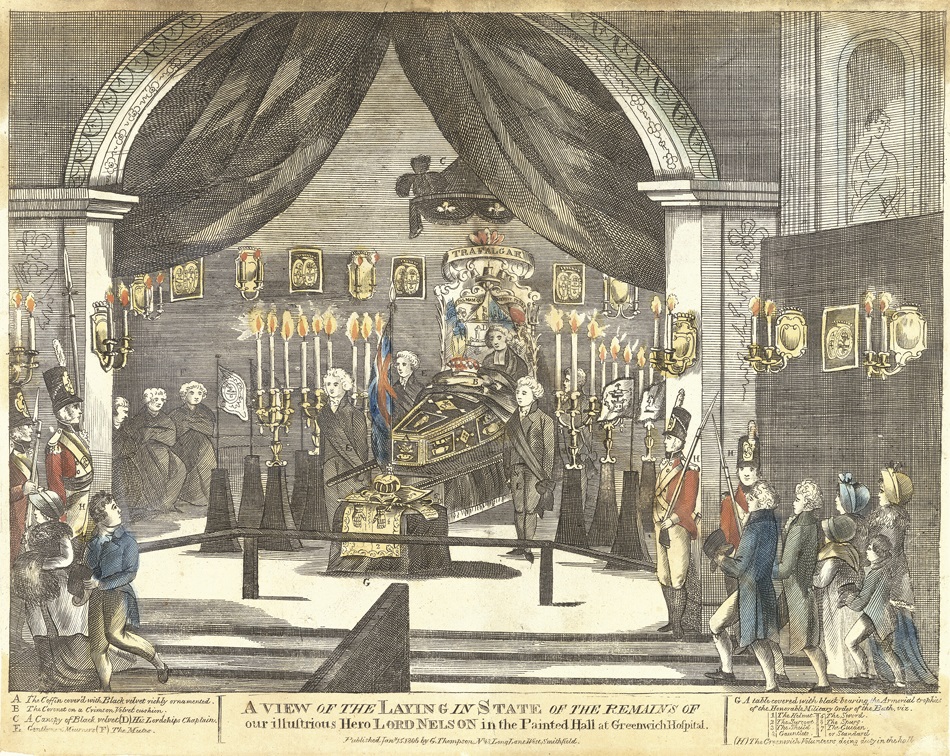 For a hundred years from 1824 the Hall was given over to the first National Gallery of Naval Art. Thornhill’s painted interior assumed secondary importance to more than 300 easel paintings by artists such as J.M.W. Turner and Sir Joshua Reynolds.

The last Greenwich Pensioners left the site in 1869 when it became home to the Royal Naval College, an officers’ training academy. From 1937 to 1997 the Painted Hall functioned as a dining space for trainee officers of the Royal Navy.

What's in the painting?

Sir James Thornhill drew on a cast of around 200 figures to tell the story of Britain’s political change, scientific and cultural achievements, naval endeavours, and commercial enterprise against a series of magnificent backdrops.

Uncover the fascinating stories in the painting

An £8.5m restoration to clean and conserve Sir James Thornhill’s magnificent 17th Century paintings was completed in 2019. Thanks to our donors and partners, the Painted Hall has been brought vividly back to life and is now open to the public.

The project has won a number of awards, including a prestigious Museums & Heritage Award for Restoration/Conservation project of the Year and two RIBA awards.

See the Painted Hall in all its newly restored glory

Be prepared to be stunned by the magnificent baroque interiors of ‘Britain’s Sistine Chapel’.

Dig deeper into our story

From 1498–1694, the site was home to Greenwich Palace, birthplace of Henry VIII and his daughters.

1873 the Naval College in Portsmouth acquired the buildings of the old Royal Hospital for Seamen and the Royal Naval College was born.

Today, we are one of London’s most popular attractions, welcoming over 1.2 million visitors every year.