Estimates for the numbers of Black Pensioners at Greenwich Hospital are difficult to establish. Between 1749 and 1763 only four men are listed as having been born in ‘Africa’. In this same period 23 had been born in the Americas of whom several are likely to have been Black.

As the British Empire grew so did the numbers of non-White applicants to the Hospital. At least 45 Black men were admitted between 1824 and 1841. Their places of birth included Grenada, Surinam, Jamaica, Barbados, Nevis, Guadeloupe, Senegal, Martinique, Angola and Guinea. Ten men were born in ‘Africa’.

Pensioners were not listed by race but by nationality. A significant number of Black Pensioners so far discovered have been African-Americans. A high percentage of the many mid-19th century American Pensioners may have been Black.

The numbers in official records do not tell the whole story – the Black Greenwich Pensioner is ever-present in caricatures and popular culture of the period. 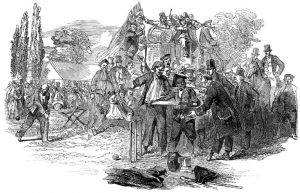 In this famous cricket match between one-legged and one-armed Pensioners at the Priory Ground, Lewisham, a one-legged Black Greenwich Pensioner is at the crease. The match was said to have attracted 2,400 spectators.

Entered Greenwich Hospital in 1839, having served aboard HMS Leviathan during the Battle of Trafalgar. Thought to have been born enslaved in 1770. Made his will in 1855. 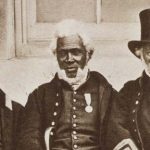