On the walls of the vestibule of the Painted Hall, in gilded letters, are the names of 47 benefactors who funded the building of the Royal Hospital for Seamen at Greenwich. The list includes King William III, Queen Anne, and the Archbishop of Canterbury. Less exalted, perhaps, is the name John Evelyn Esq, but its prominent position, immediately beneath the Queen, reflects the fact that without his efforts the project would almost certainly have failed.

John Evelyn is probably Deptford’s most famous resident. His house, Sayes Court, was beside the Royal Navy Dockyard. Like his contemporary and friend Samuel Pepys, he kept a diary. His public duties included serving on the Council for Trade and Foreign Plantations, at a time when English overseas colonies were beginning to exploit enslaved people from Africa on a large scale. 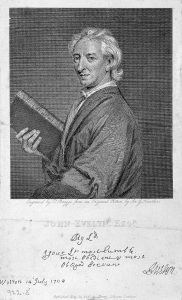 Evelyn was the Treasurer of Greenwich Hospital from the very beginning in 1695.  He was born 400 years ago on 31 October 1620 so, at 74, he had already reached the age when most people hope to be taking things a bit easier. In fact Evelyn worked tirelessly on the various committees, persuading his friends in high places to pledge donations to the project and then chasing up those donations when they failed to materialise, which was all too often the case. At one point he is quoted as saying that they ‘avoid me, as one Carrying the Pest about me’. We see the names of many of these subscribers on the benefactors’ boards in the vestibule of the Painted Hall. 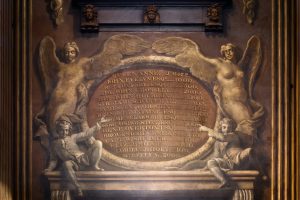 Donor board in the Vestibule of the Painted Hall Showing John Evelyn’s donation of £1000.

As we can see from the following diary entries, he accepted the post of treasurer a couple of months after the death of Queen Mary, during a very cold winter:

29th December, 1694. The smallpox increased exceedingly, and was very mortal. The Queen died of it on the 28th.

13th January, 1695. The Thames was frozen over. The deaths by smallpox increased to five hundred more than in the preceding week.

17th February, 1695. Called to London by Lord Godolphin, one of the Lords of the Treasury, offering me the treasurership of the hospital designed to be built at Greenwich for worn-out seamen.

The following year, John Evelyn, with Sir Christopher Wren, laid the foundation stone for the buildings, witnessed by the King’s Astronomical Professor John Flamsteed, the first Astronomer Royal, who features on the Lower Hall ceiling.

30th June, 1696. I went with a select committee of the Commissioners for Greenwich Hospital, and with Sir Christopher Wren, where with him I laid the first stone of the intended foundation, precisely at five o’clock in the evening, after we had dined together. Mr. Flamstead, the King’s Astronomical Professor, observing the punctual time by instruments.

Evelyn’s salary as treasurer was £200 a year (approximately £20,000 today) but he said it was a long time before he saw any of it. To add to his woes his beloved Sayes Court had been cruelly knocked about by Peter the Great, who took up residence to learn the art of shipbuilding in Deptford Royal Dockyard next door. Evelyn was particularly dismayed by the state of his 400-yard holly hedge, through which the Czar and his party had pushed each other on wheelbarrows.

When Queen Anne came to the throne in 1702 Evelyn and his fellow commissioners began to get the Hospital’s finances into a somewhat healthier state.  In 1703 at the age of 82 Evelyn handed over the account books to his son-in-law William Draper.

12th August, 1703. The new Commission for Greenwich hospital was sealed and opened, at which my son-in-law, Draper, was present, to whom I resigned my office of Treasurer. From August 1696, there had been expended in building £89,364 14s. 8¼d. (More than £9.5 million today, give or take the odd farthing.)

Evelyn lived long enough to see the first Pensioners admitted. By the summer of 1705 there were 81 inmates.

June, 1705. I went to Greenwich hospital, where they now began to take in wounded and worn-out seamen, who are exceedingly well provided for. The buildings now going on are very magnificent. 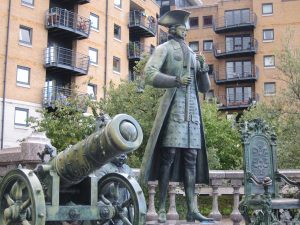 Statue of Peter the Great at Glaisher Street, Deptford.  Photograph by Elaine Galloway.

Published with thanks to Elaine Galloway and the Old Royal Naval College “Lives of the Pensioners Research” Volunteers.