The Greenwich Foundation for Old Royal Naval College and the Diocese of Southwark are pleased to announce the appointment of The Reverend Dr Robert Tobin as the new Chaplain at the Chapel of St Peter & St Paul.

The Chapel is a living, working church, forming part of the Old Royal Naval College at the heart of the Maritime Greenwich World Heritage Site. It hosts regular services and lunchtime recitals, as well as special events, concerts, and weddings, and attracts visitors from around the world.

Dr Tobin, said, “I am delighted to have been appointed as Chaplain. It will be a privilege to continue my ministry in such a vibrant place made up of the wonderful diversity of people who work, learn, and worship within its beautiful buildings. I am also pleased to be joining the continuing effort to make the Old Royal Naval College welcoming and accessible, both to the local community and to the many visitors who regularly pass through its gates.” 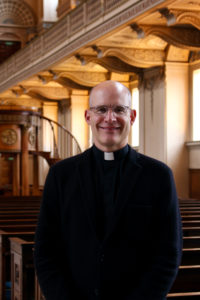 The Licensing of Dr Tobin by The Lord Bishop of Southwark as Chaplain to the Greenwich Foundation and as Honorary Curate of St Alfege, Greenwich, took place at a service on Sunday 11 September.

In his previous ministry, Dr Tobin has served as both a university chaplain and parish priest. Following his curacy, he returned to his native the United States to take up the post of Episcopal/Anglican chaplain at Harvard, which included teaching in the Divinity School. He then spent seven years as chaplain and tutor at Oriel College Oxford, where he offered pastoral support not only to students, but also to the fellows, staff, and alumni. In 2017, he was appointed as the vicar of the Church of St Mary and St John the Divine, Balham, in southwest London, where he remained until the summer of 2021. Since that time, he has completed a book on the post-war history of the American Episcopal Church, published this year.

The beautiful Chapel of St Peter & St Paul was rebuilt in 1779 by James ‘Athenian’ Stuart following a dreadful fire that gutted the original building designed by Sir Christopher Wren and is considered to be one of the finest 18th-century interiors in existence.

It is a place of prayer, sanctuary and peace, with its richly decorated ceiling, naval themes displayed throughout, and an exceptional altarpiece painted by the Raphael of America, Benjamin West.

The recently restored painting and ornate frame have been fully restored after an expert team undertook the meticulous and skilful work of cleaning and conservation early this year. The project, funded by the American Friends of the Old Royal Naval College, was completed by The Greenwich Foundation as part of its charitable duties to continually invest in conservation and enhance the visitor offer.