The Mayor of the Royal Borough of Greenwich Councillor Leo Fletcher and the Mayoress, Jacqui Power, took time out of their busy schedule to meet with pupils from Halstow Primary, on Monday 26 September 2022.

A class of Year 1 pupils from a school based in the heart of the historic Greenwich were on their first big school trip joining a workshop session called Impossible Creatures. The workshop is one of many hands-on cross-curricular workshops designed to inspire children and young people with the historical importance of the Old Royal Naval College. The free year-round learning programme is part of a thriving primary and secondary school programme that has recently been awarded the highly esteemed Sandford Award for heritage education.

The Mayor and Mayoress, accompanied by Chief Executive of the Old Royal Naval College, Matthew Mees, had the opportunity to discover the history and cultural significance of the site for themselves; hearing about the artistic genius behind the magnificent Painted Hall, taking a tour of the newly renovated Nelson Room and a walk through the grounds to experience the incredible architecture of Sir Christopher Wren’s Baroque buildings in the UNESCO World Heritage site. 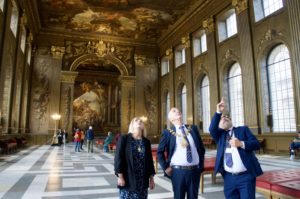 The Mayor will return to the site this week to officiate the Royal Borough of Greenwich’s citizenship ceremony where residents of the borough become British citizens. This annual event is hosted by Old Royal Naval College in the Chapel and is a celebratory event that welcomes new citizens, their friends and family, followed by an optional free guided tour of the Painted Hall and the ‘500 years of History’ tour, as well as giving every new citizen an annual pass allowing unlimited entry for the whole year. 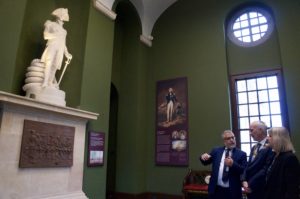