Renovation to the historic Nelson Room is underway

The Nelson Room is a small room in Greenwich, but it has a big place in British history.

On Christmas Eve 1805, on a cold night, the body of Vice-Admiral Lord Nelson arrived at Greenwich Hospital, now known as the Old Royal Naval College. Following his death during the Battle of Trafalgar on 21 October, his body had been brought back to England aboard HMS Victory in a casket of spirits, travelling up the Thames and arriving by yacht at Greenwich, where it was taken to a small records room off the Painted Hall in preparation for his grand lying-in-state. 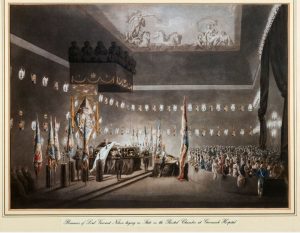 Greenwich became the epicentre of the national expression of loss and mourning over a 11-day period. Many tens of thousands of people descended on Greenwich during Nelson’s lying-in-state, so the local militia volunteers had to be brought in to control the crowds. Carriages full of people eager to pay their respects stretched all the way back to central London.

Today that small records office – or ‘Nelson Room’, as it later became known – is undergoing a dramatic transformation. Designed by Sir Nicholas Hawksmoor according to Wren’s masterplan, the room is being carefully conserved and the story around Nelson and his connection to Greenwich explained. Its imposing roof lantern, monumental stonework and Swedish marble flooring is being restored to its former glory. Historic paint analysis is providing the basis for a colour scheme. The visitor information is being replaced by an upgraded interpretation highlighting the time Nelson’s body spent in Greenwich before being taken by barge to St Paul’s Cathedral for his funeral. 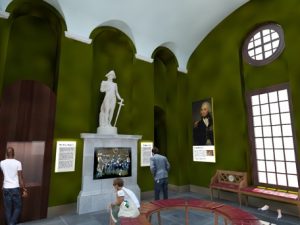 An audio programme and ‘Pepper’s Ghost’ display will illuminate Nelson’s lying-in-state, while a newly commissioned bronze panel, by sculptor Antony Dufort, will pay tribute to the many sailors who fought at Trafalgar and later became ‘Greenwich Pensioners’ at the Royal Hospital for Seamen (latterly known as Greenwich Hospital).

Alongside Martin Ashley Architects and Metaphor, our exhibition designers, there is an advisory panel of writers, historians, and curators as well as audience focus groups on hand to help develop the approach. 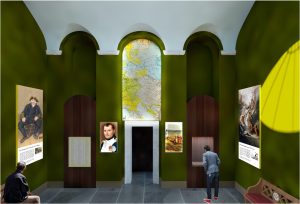 The project will shine a light on an important part of the Old Royal Naval College’s history, engage local people and encourage new audiences. Our multi-sensory approach to storytelling will cater for a wide range of access needs. Crucially, the renovation will include a new passenger lift that will provide wheelchair access to the Nelson Room and the Painted Hall’s Upper Hall for the first time.

The re-opening of the Nelson Room is scheduled for March 2022.