The buildings and grounds may seem familiar to many, even if they have never visited the Old Royal Naval College. That is because it has been the backdrop to countless films and TV programmes for over half a century.

The Old Royal Naval College is a World Heritage Site, a leading and award-winning visitor attraction with over 1.2 million visits each year, and one of the UK’s most sought-after film locations.

Our grounds have been transformed into the sets and backdrops for many of the biggest films around in recent years including major blockbusters like Les Misérables, Four Weddings and a Funeral, Pirates of the Caribbean 4, Oscar winning The King’s Speech, Thor II: Dark World, James Bond’s Skyfall and Netflix’s The Crown and Enola Holmes. 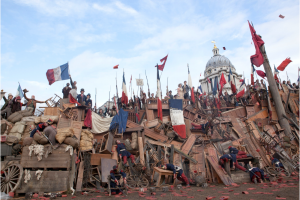 The iconic Old Royal Naval College, right in the heart of the maritime Greenwich World UNESCO Heritage Site, attracts filmmakers and accommodates a wide range of filming, due to its iconic architecture, expansive grounds, and accessibility to London, making filming here highly sought after. As a heritage site, funds raised from filming are increasingly important to maintain an independent income to support the maintenance, interpretation and conservation projects across the site. 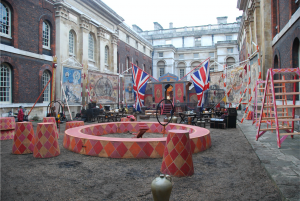 The 18th century buildings offer stunning architecture, some of the best views in London, and have doubled for London, Berlin, and Paris through the ages. It has been reimagined in many different ways by film companies who use the spaces in innovative ways, from erecting giant ‘green screens’ to create larger than life battles, to using the beautiful historic interiors and exteriors to bring their vision to life.

In fact, so many films have been shot here that Empire magazine called the Old Royal Naval College ‘the most popular filming location in the world’.

The sheer scale and magnificence of the Painted Hall makes it very popular with filmmakers.  The earliest film to be shot here was Indiscreet in 1958, 63 years ago, with two of the finest actors of all time, Cary Grant and Ingrid Bergman. The scene filmed here contains a dance sequence with Bergman and Grant waltzing down the hall. This movie is rare in that the scenes are actually based around a ball at the Royal Naval College (as these buildings still were in 1958) rather than the building doubling as somewhere else. 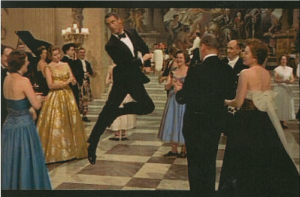 One such example of the Painted Hall becoming somewhere else entirely for a film is when the makers of Lara Croft: Tomb Raider transformed it into the Venetian chamber where Angelina Jolie’s character meets with the Council of the Illuminati.

When extra lighting is needed in the hall the lights are often shone in from the outside. The heat from the lights can be extreme and keeping them outside is one way of protecting the paintings

The hall is most recognised for the scene where Johnny Depp was very unceremoniously dragged by the guards in Pirates of the Caribbean 4, only to escape by crashing through a window – of course the window was in the replica Painted Hall which had been built at Pinewood Studios.

Every inch of the site has been used in connection with either actual filming or the preparation and administration of a shoot. During the filming of Pirates of the Caribbean, the site stabled over 50 horses, and again more recently, during the filming of Les Misérables. At the end of the shoot, our groundsmen had good manure for the gardens! When film crews leave the site, they have to restore it completely to its former state so whatever goes down on the roadways or on the lawns has to come up. 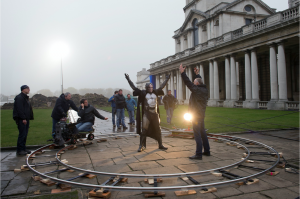 In Sherlock Holmes I (2008) Lower Grand Square was transformed into Piccadilly Circus. In The Wolfman the area was surrounded by walls enclosing a garden with lots of trees. In Thor II, not only does an alien spaceship land on the square, but the entire space is torn up and destroyed by the ship and the subsequent battle for the safety of the universe.

Most memorably during the filming for Les Misérables, Grand Square was used in the barricades scene. In addition, a 7-metre tall statue of an elephant was built on site to represent a Parisian monument.  The original was stone, however the polystyrene and resin replica was equally as impressive.

The Chapel perhaps most famously became the Catholic St Mary of the Fields for the second wedding in Four Weddings and a Funeral (1994) and featured in The Crown seasons 3 and 4 as the backdrop for weddings. During Kingsman 2, Sir Elton John even found himself playing the Chapel Organ. 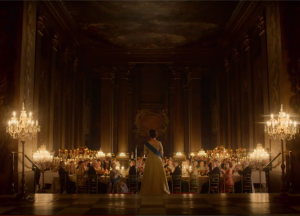 Our staff and volunteers all have their own personal film related stories to tell and anyone has the opportunity to join a behind-the-scenes film and TV location tour on the last weekend of every month – a guided tour through over 60 years of filming both on the iconic riverside grounds and inside the magnificent Painted Hall.

Saturdays & Sundays at 12:30pm & 2:30pm (plus Thursdays & Fridays throughout June-September) Find out more