It is with deep sadness that we note the death of HRH Prince Philip, Duke of Edinburgh.

The Duke of Edinburgh was made Baron Greenwich of the Royal Borough of Greenwich in 1947 and is well connected to the Borough. His longstanding relationship with the Royal Navy has been well documented and we have had the privilege of His Royal Highness visiting the Old Royal Naval College on many occasions through the years.

Prince Philip began his naval career in 1939 as a cadet and attended the Royal Naval Staff College at Greenwich for training in October 1948. Old newsreel footage shows The Duke of Edinburgh at work at in a classroom and walking across the grounds, as well as shots of his cabin. 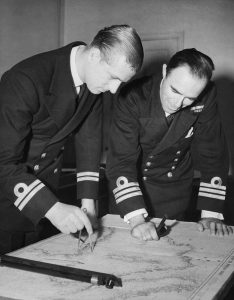 The Duke of Edinburgh, left, reviews a navigational chart with Commander W.G.F. Bird, of the British Royal Navy, on May 12, 1948 at the Royal Naval College Greenwich, England. © Eddie Worth/AP Image

You can also see Prince Philip studying and attending a lecture as part of a naval training course in 1948, in archival footage from British Pathé.

The Duke of Edinburgh with unidentified naval officers, date unknown

The College has been the setting for many royal and VIP visits, occasions of state and conferences. Pathé footage from 1955 shows what was probably the first televised mess dinner in the history of the Royal Navy. The Queen and The Duke of Edinburgh attended a dinner in the magnificent Painted Hall of the Royal Naval College, Greenwich, to mark the 150th anniversary of the Battle of Trafalgar, at which Admiral Lord Nelson was killed. The film below shows them making their way to the top table in the Upper Hall before the Queen gives a speech.

In 1967, The Queen and The Duke of Edinburgh visited the Royal Naval College, to confer a knighthood on Sir Francis Chichester following his single-handed round-the-world voyage in a 53-foot yacht, Gipsy Moth IV. The below film shows  the knighthood being conferred in the open air in the grounds with lots of schoolchildren watching and cheering. 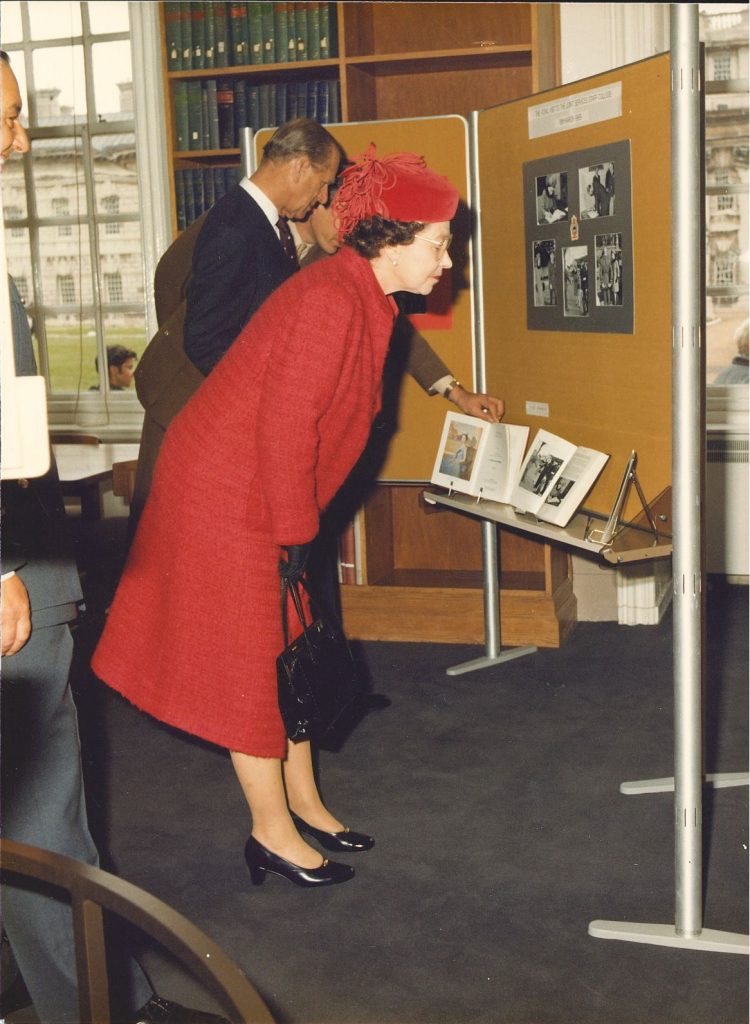 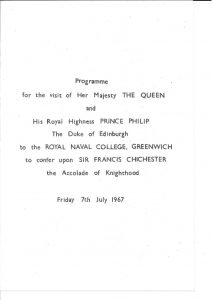 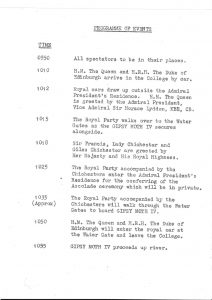 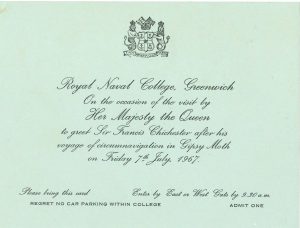 Programme and invitation for the above event

In November 1997, Charles, Prince of Wales hosted a lunch in the Painted Hall for members of the British and foreign royal families who were London to celebrate his parents’ Golden Wedding anniversary. This lunch was attended by six kings, 10 queens, 32 princes, 31 princesses, six dukes, two duchesses, 33 earls, countesses, lords and ladies. The Queen and Prince Philip lunched at the Banqueting House, Whitehall, hosted by the British Government. In the evening all the guests met up for a dinner and ball at Windsor Castle.

On 21 October 1998, the Duke of Edinburgh was guest of honour at the ceremony to mark the closure of the Royal Naval College following the final formal Trafalgar Night Mess Dinner to be held here. This was a poignant occasion, as the Royal Navy was relinquishing its close association with the site after 300 years: the buildings had housed the Royal Hospital for Seamen from 1696 to 1869, and the Royal Naval College from 1873 until 1998.

In his speech at the dinner, the Duke of Edinburgh spoke movingly about the end of the Royal Naval College era at Greenwich, as well as the significance of Nelson’s victory at Trafalgar, and he led the traditional toast to the ‘Immortal Memory’ of Nelson.  After dinner, the guests stood on the steps of the College as the White Ensign was lowered for the last time: the flag was presented to Prince Philip, who passed it to the Commander of the College, who in turn handed it to the Chaplain for safe keeping in the Chapel.

In May 2001, the Duke of Edinburgh attended a dedication of the memorial gates to Lord Lewin. 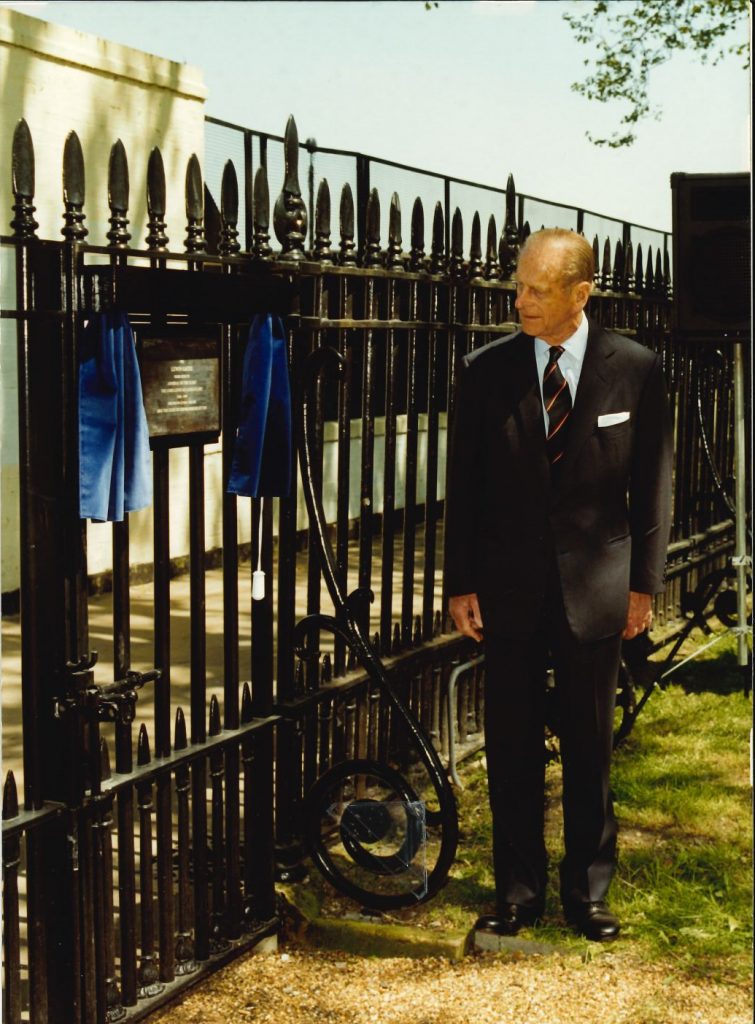 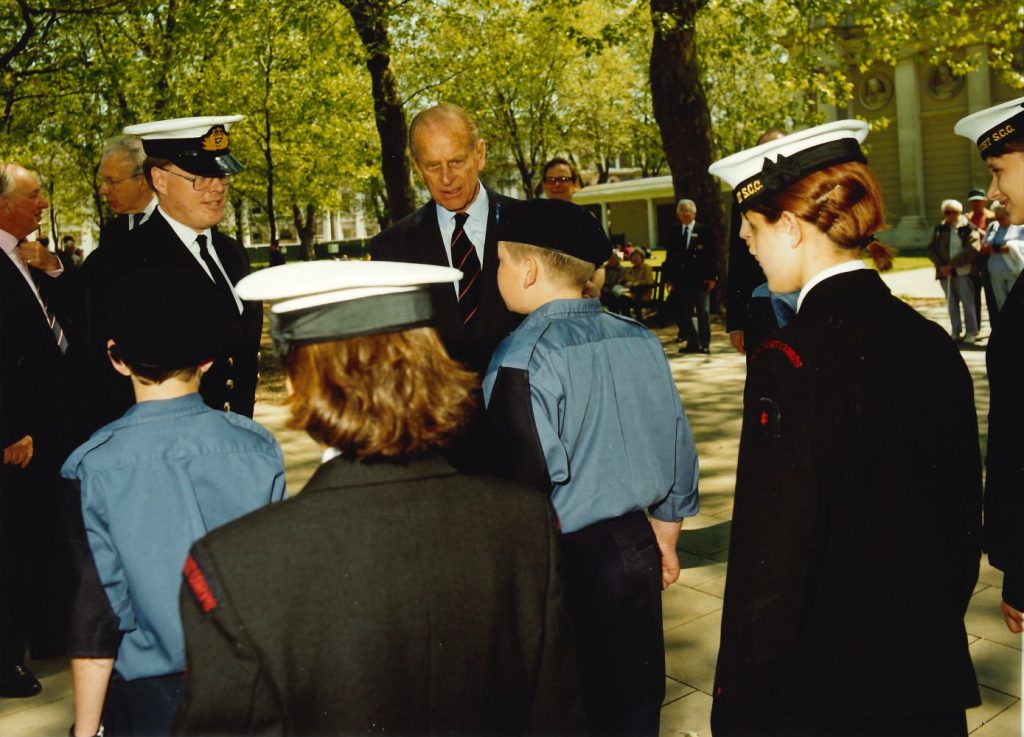 Dedication of memorial gates to Lord Lewin, attended by the Duke of Edinburgh, 23 May 2001

The Trustees, Chief Executive, staff, and volunteers of the Old Royal Naval College send our heartfelt condolences to HM The Queen and all the Royal family at this time.