Of the eight identifiable mortals on the great Lower Hall ceiling of the Painted Hall, five are astronomers. The earliest of these is Nicolaus Copernicus, born on 19 February 1473. He is the dark-clad man at the East end of the ceiling, standing beside the stern of the Spanish Galleon. He is holding up a golden ‘SYSTEM’, as Thornhill called it, which represents his version of a heliocentric Solar System with the human-faced sun at the centre; a planet, probably Earth, in orbit around it; and a little moon orbiting around the Earth. 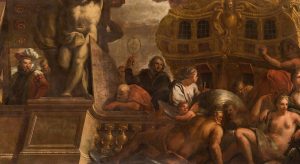 No portrait of Copernicus from his own lifetime is known to exist today. Thornhill may have based his image on a portrait from around 1580 which is thought to have been copied from a self-portrait now lost. Certainly the haircut and style of dress look similar. But the golden model of the ‘SYSTEM’ held aloft by Copernicus seems to have been Thornhill’s own idea, copied in several later engravings and designs for commemorative stamps including, perhaps surprisingly, a set issued in 1973, by the Vatican City. For 200 years the Catholic Church had outlawed the Copernican heliocentric theory, a decision which had grave consequences for another of the Painted Hall astronomers, Galileo Galilei, born in Pisa on 15 February 1564. On 13 February 1633 he arrived in Rome for his trial before the inquisition, facing a charge of heresy for advocating the theory of Copernicus. Galileo himself can be seen peering through the telescope, which he had been the first to use for observing the stars, at the other end of the ceiling. 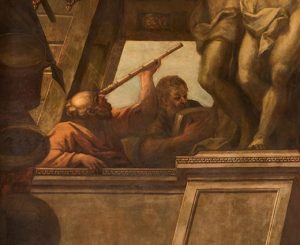 So, was it to reinforce a pro-Protestant, anti-Catholic message that Thornhill included Copernicus and Galileo, as onlookers to the Triumph of Peace and Liberty over Tyranny? Perhaps, but we should remember that Thornhill was himself a Fellow of the Royal Society, which suggests that he was interested in theories and discoveries about the natural world. The arrangement of the Solar System, and its brilliant exposition by Isaac Newton, could be said to provide an ideal framework on which to represent the ascendancy of William and Mary.