Dick Dock, the Lobster and the Crab

Amongst the pictures in the Reflecting Greenwich: Watercolours and sketches from the Royal Greenwich Heritage Trust Exhibition is the curiously titled Dick Dock, or the Lobster and the Crab by the artist and caricaturist Isaac Cruikshank (1764-1811). The picture was used to illustrate a song by the prolific English songwriter Charles Dibdin (1745-1814) called The Veterans. It tells the tale of a chance encounter outside of a local tavern, between a one-armed Chelsea Pensioner and a one-legged Greenwich Pensioner Dick Dock who, when emboldened by the beer he’s just consumed, proceeds to taunt the old soldier over the loss of his arm.

“How good master lobster did you lose your claw? Was’t that time in a drunken fray? Or t’other when you ran away?”

The soldier responds by focussing on the sailor’s wooden leg, “If I’m a lobster, master crab, by the information on your nab, In some skirmish or other they have crack’d your shell; And then how you hobbling go, On that jury mast your timber toe.”

Dick Dock soon learns however that the target of his jibes is called Hannibal, the man that pulled him from the jaws of a shark when he once fell overboard his ship. Similarly, Hannibal reflects on how Dick Dock stepped in when his own life was once threatened by a French boarding party upon the same ship. The tale ends as the taunts are quickly forgotten and the two settle down to drink, toasting the brave soldiers and sailors of the King George’s military services. 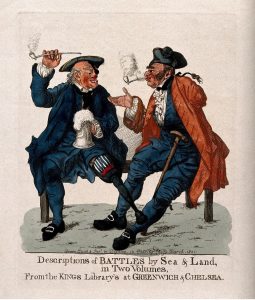 For his lobster and crab, Dibdin chose a Chelsea and a Greenwich Pensioner respectively as these veterans were the most commonly associated with the lobster and crab tropes, appearing in paintings and etchings such as this one by Robert Dighton from 1801. Popular ‘smoking’ models of the characters were even produced, crafted from papier-mâché. A smoke pastille or lighted taper placed in the rear aperture producing realistic smoke puffs from the Pensioners pipes (a rare example can also be seen at the Reflecting Greenwich exhibition).

Cruikshank however, replaced the retired Chelsea Pensioner with a serving Royal Marine, presumably as the Marines sailed with and fought alongside the sailors of the Royal Navy and as such, Hannibal would have been better placed to aid Dick Dock in his hour of need. Marines, like the majority of army infantry regiments of the period and the ex-army Chelsea Pensioners, were nicknamed ‘lobsters’ as the scarlet red uniform jackets or coats they wore resembled the colour of a boiled lobster.

The one-legged, slightly sideways shifting Greenwich Pensioner was a perfect match for the caricature of the ‘crab’ although a more usual nickname for the gaggles of noisy and boisterous Pensioners was ‘Greenwich Geese.’
In some versions of the Cruikshank print the Royal Marine’s jacket was mistakenly printed blue, the colour worn by the regiments of the Royal Marine Artillery. What name did the sailors apply to these Blue-Marines? ‘Uncooked lobsters’ of course!

By Simon Davies and Jessie Cassidy. Reflecting Greenwich: Watercolours and sketches from the Royal Greenwich Heritage Trust Exhibition is free to visit in the Visitor Centre until 30 January.