It is with deep sadness that we acknowledge the death of Her Majesty the Queen. The Trustees, Chief Executive, staff and volunteers of the Old Royal Naval College send our heartfelt condolences to the King and the Royal Family at this time.

The Old Royal Naval College had the privilege of hosting Her Majesty Queen Elizabeth II several times throughout her life as she has visited the Royal Borough of Greenwich.

In 1937, an eleven-year-old Princess Elizabeth attended the opening of the National Maritime Museum with her parents and grandmother. This was the first public event for the new royal family, three weeks before King George VI’s coronation. The Queen dined in the Painted Hall on several occasions – notably in 1955 in celebration of the 150th anniversary of the Battle of Trafalgar – and again in 1973 for the Royal Naval College’s centenary.

The Old Royal Naval College, once the site of a Royal Tudor Palace has been the setting for many royal and VIP visits, occasions of state and conferences. The buildings have often doubled for Buckingham Palace in films and television dramas about the royal family, such as Patriot Games, The King’s Speech and The Crown.

1947: The Duke of Edinburgh was made Baron Greenwich of the Royal Borough of Greenwich.

March 1950: King George VI and Queen Elizabeth with President and the Auriol of France during their visit to the Royal Naval College Greenwich with Princess Elizabeth. 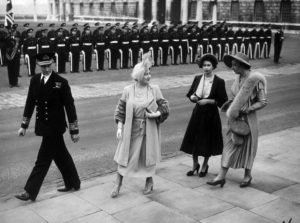 21 June, 1955: Queen Elizabeth II in company with the Queen Mother attended a ceremony at the Chapel of the Royal Naval College, where it was officially dedicated to St. Peter and St. Paul.

21 October, 1955: Her Majesty the Queen, Prince Phillip and Admiral Lord Louis Mountbatten attend a banquet in the Painted Hall to mark the 150th anniversary of Admiral Lord Horatio Nelson’s victory at the Battle of Trafalgar. 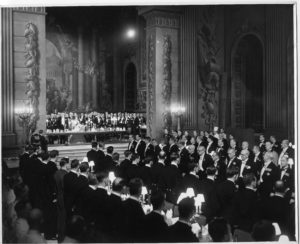 More than 90 flag officers were in attendance along with six sub-lieutenants, who were given the opportunity to make up the numbers providing they paid a fee of thirty shillings each for the privilege. It was the first time a mess dinner held by the Royal Navy was televised. 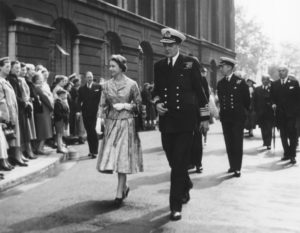 The Queen Elizabeth Ante Room was in the King William Undercroft of the Royal Naval College. It had itself been declared open by HRH Elizabeth, the Queen Mother, in 1954, having been converted from the old Pensioners’ Dining Room underneath the Painted Hall.

It now houses the Painted Hall Cafe and Shop as part of the Old Royal Naval College.

1 August, 1964: Tercentenary celebrations of the Royal Marines take place at the Royal Naval College , Greenwich, with the Queen in attendance.

7 July, 1968: Sir Francis Chichester, the first man to sail single-handed around the world, is knighted by Her Majesty the Queen in Grand Square. 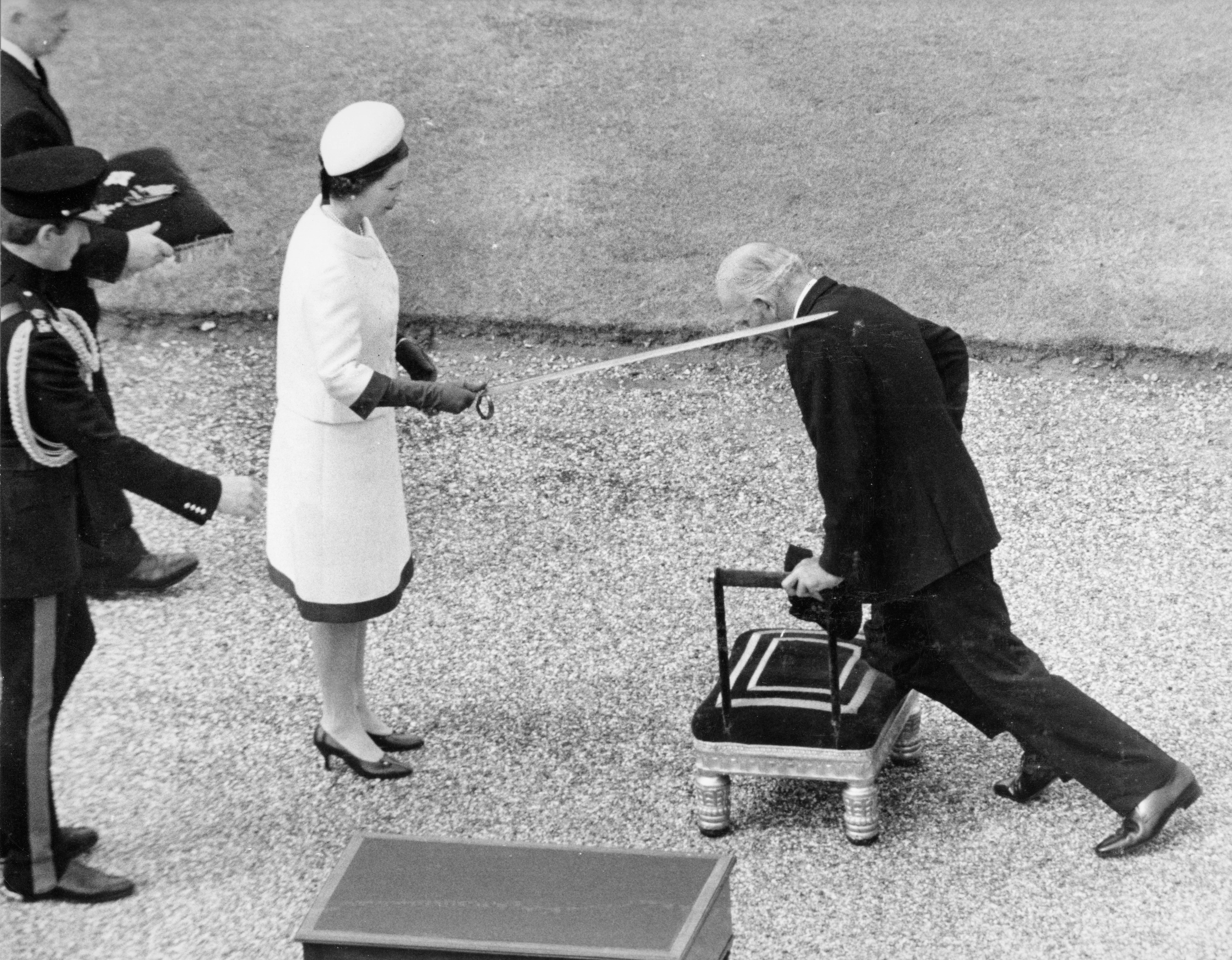 For the ceremony the Queen used the same sword that Elizabeth I had used to knight the sailor, privateer and circumnavigator Francis Drake at nearby Deptford in 1581.

Chichester arrived in his boat, Gipsy Moth IV, which he had sailed from its overnight anchorage at Woolwich. The following year Gipsy Moth was put on display in dry dock by the river at Greenwich for visitors to explore the tiny spaces inside. 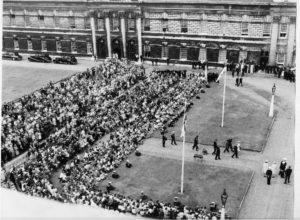 1973: The Centenary year of the establishment of the Royal Naval College. The Queen and Prince Phillip attend a lavish dinner in the Painted Hall to celebrate the event. Lobster and veal were on the menu, with the music provided by the band of the Royal Marines.

1977: The Queen goes for a walkabout in Greenwich as part of her Silver Jubilee celebrations.

May 1987: The Queen is present for the Joint Services Defence College’s 40th Anniversary. Her Majesty has tea in the Painted Hall accompanied the band of the Royal Marines.

July 1987: The Queen dines aboard the Pacific Princess, part of the  P&O Cruise line fleet, as they celebrate their 150th Anniversary. The ship is moored on the Thames overlooking the buildings of the Royal Naval College.

April 25th, 2012: The King’s Troop (newly based at Woolwich) forms a guard and the royal barge Gloriana makes its way up the Thames, having dropped the Queen and Prince Philip off at Greenwich Pier.

The Queen was here to confer Royal Borough status on Greenwich and to visit to the newly refurbished Cutty Sark, following fire damage in 2007.

Scenes for the block-buster musical Les Misérables had just been filmed at the Old Royal Naval College. The grass was in a sorry state and had to be painted green before the Queen was driven through the grounds in her Range Rover.