Black people have visited and lived in Greenwich and neighbouring Deptford since the 1500s. John Blanke, the Black trumpeter to Henry VII and Henry VIII, came with the Tudor court to Greenwich Palace. The slave-trading Hawkins family and the East India Company were both originally based in Deptford.

Black people in the two towns tended to do different kinds of work. Greenwich had a large number of Black domestic servants, some enslaved, living in properties around the Park. Deptford was home to fewer enslaved workers and to more craftspeople who lived close to the waterfront – joiners, dockworkers, mariners and their families. 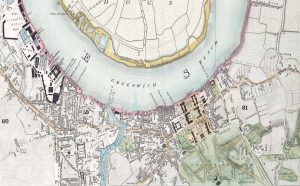 This map has been created from a sample of parish records from the late 1600s to the early 1800s. Black Greenwich Out-Pensioners are not, for the most part, visible in these records so they are under-represented here.