Passage of time at the Old Royal Naval College

As we set our clocks forward this weekend, it is worth paying some thought to the historic turret clock located in the dome above the Chapel at the Old Royal Naval College, Greenwich.

The importance and use of this public clock in the Chapel dome cannot be overestimated as a version of the clock has kept time for over 300 years. It has informed and summoned all those living and working in and visiting Greenwich Hospital, the Royal Naval College and today the Old Royal Naval College.

Both the domes of the magnificent Baroque buildings designed by Christopher Wren, and built between 1696 and 1712, have a clock face, though the one above the Painted Hall is a compass rose, connected to the weather vane above to indicate wind direction emphasising the maritime nature of the establishment. 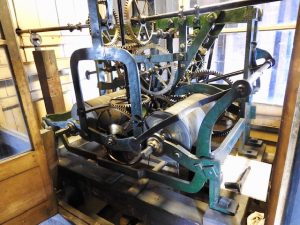 Langley Bradley in 1704 supplied a clock that was installed in the east (Chapel) dome. In 1779 the Chapel was gutted by a serious fire destroying the Chapel and part of the dome which housed the original clock. The Chapel was rebuilt by Scottish architect and neoclassical artist James ‘Athenian’ Stuart (1713-1788) with nautical motifs designed to make the Naval Pensioners feel at home.

The clock we see today was made in the 1780s by the firm Ainsworth-Thwaites of Clerkenwell, under the direction of John Smeaton (an engineer famous for the Eddystone lighthouse), John Holmes (a successful clock and watchmaker, cousin to Smeaton and supplier of the ‘Journeyman Regulator’ clocks for Captain Cook’s voyages) and a Rev. W. Ludlam (clergyman and mathematician). Smeaton acted as a Commissioner and Receiver for Greenwich Hospital just prior to 1780.

The original clock, it appears, along with one of the original bells dating from 1716, was refurbished and installed in a Birmingham church tower. 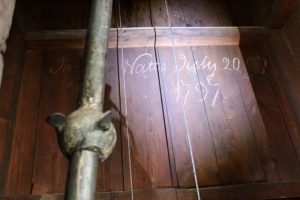 The clock is not accessible to the public but a behind the scenes tour reveals a curious signature ‘graffitied’ in chalk, on the inside of the pendulum box located on the floor below the clock mechanism, which reads ‘James Watt 1797’. Could this signature relate to the celebrated Scottish inventor and mechanical engineer James Watt? At present the connection is doubtful as although Watt was elected to the Smeatonian Society of Civil Engineers in 1789, founded by John Smeaton, any further collaboration between these two, appears to be non-existent. Perhaps time and a little more research will one day solve this intriguing mystery.

The clock has an authentic mechanical operation. It works by means of a pendulum linking to a series of chains and cogs. The Facilities team winds up the clock every Monday to maintain its operation. Due to the nature of the mechanics, the time loses about 1 minute every 2 weeks, which our team adjust to ensure it is showing the correct time. We also manually adjust the time to represent either British Summer Time or Greenwich Meantime seasonally. The clock is fully maintained with contracted services provided by Smith of Derby who are expert maintainers of a number of historical clocks worldwide. 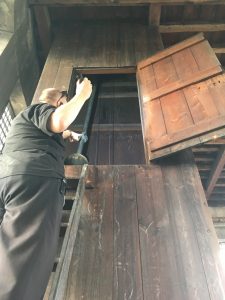 The next time you are in Greenwich, take a moment to stop and look up at the impressive Chapel dome where a clock has presided over 300 years of rich history, keeping time for an incredible cast of people, from retired sailors of the Greenwich Hospital in the 1700s and 1800s; to the naval officers training at the Royal Naval College from 1873 to 1997; to all those who live, work, study, or spend their free time within the sight of its dial and the sound of its chimes today.