A Brief History of Sir James Thornhill; Knighted 2 May 1720

James Thornhill is the artist behind the beautiful mural paintings that can be admired in the Painted Hall. He was still relatively unknown when, 32 years old, he won the commission at what was then the Royal Hospital for Seamen – or Greenwich Hospital – in 1707.

Thornhill was born in 1675/6 into the squirearchy of Dorset. The family fortunes dwindled with the Restoration, and Walter Thornhill, Thornhill’s father, had to enter business as a grocer in Dorchester.

We don’t know how Thornhill came to choose painting as a profession, but we may assume that he showed an early talent for drawing. He was also encouraged in his purpose by his maternal uncle, Dr Thomas Sydenham, an eminent physician, who left £30 for him to be apprenticed to a trade or profession. The apprenticeship to a distant relative, Thomas Highmore of the Painter-Stainers’ Company, began at the age of 14.

The Painter-Stainer’s Company – still existing today – was one of the Guilds created in medieval times and had become a portal for incoming artists in London. The biggest factor affecting English painting during that time was the increasing presence of foreign artists (mainly from Italy and France).

Thornhill completed his apprenticeship in 1696 and kept working for Thomas Highmore. Whilst he was assisting his master in the decoration of great houses such as Chatsworth House (Derbyshire), Thornhill was exposed to the work of foreign decorative painters, such as the Italian Antonio Verrio and, more particularly, the French Louis Laguerre. It is possible that he became one of Verrio’s assistants in the decoration of the Queen’s drawing-room at Hampton Court Palace in about 1702. It is clear that he was influenced less by his master Highmore and more by the work of these glamorous foreign artists.

Thornhill became a painter of historical subjects and took his inspiration from the Italian Baroque tradition. His skill in this field was remarkable, since his training was irregular and his trips abroad came only after he had reached maturity as an artist.

Thornhill’s first recorded commission was a theatrical one: in 1705 he painted the scenes for Thomas Clayton’s opera Arsinoë, Queen of Cyprus, performed at the Theatre Royal, Drury Lane. Those designs (now in the Victoria and Albert Museum) show the artist already developing a flair for the dramatic.

Many other important commissions followed, and Thornhill undertook large scale works such as the Painted Hall, the ceiling at Blenheim Palace, several Oxford colleges, the dome of St Paul’s Cathedral and the bedchamber of the future King George II at Hampton Court Palace.

To obtain the commission of the dome of St Paul’s Cathedral, Thornhill had to compete against extremely talented Italian and French artists. In the end, Thornhill was most likely chosen because he was the only one of the competing artists who was Protestant and British.

It is worth noting that, despite an extraordinarily busy career, Thornhill travelled to the continent twice: to the Low Countries in 1711, and to Paris in 1717. He never got as far as Italy.

The Painted Hall at Greenwich is one of the most exquisite examples of Thornhill’s work. Painted over a period of 19 years from 1707 to 1726, it documents Britain’s national mythology in epic form. The transition of monarchy from Stuarts to Hanoverians, scientific discovery, maritime navigation and exploration, the growth of commerce and prosperity and the beginnings of Empire are enabled and supported by a panoply of classical gods and legendary characters.

It is not clear exactly how Thornhill won the commission for the Painted Hall at the Royal Hospital for Seamen, but he had some useful contacts among the Hospital’s Commissioners. His relative inexperience may have recommended him over his more established French and Italian rivals because he would have been cheaper to employ. His British nationality and Protestant faith were also in his favour.

The Lower Hall paintings very well received at the time and helped Thornhill win the other prestigious commissions previously mentioned. Thornhill’s professional success led to a degree of official recognition never before achieved by a British artist.

In June 1718 George I made Thornhill History Painter-in-ordinary, and in March 1720 Sergeant-Painter, succeeding his former master Highmore in the latter role. On 2 May 1720, 300 years ago, Thornhill was knighted by King George I – the first British artist to be knighted for his work. 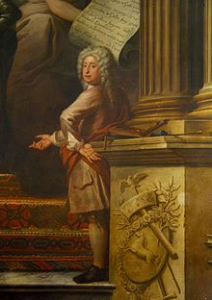 On the West Wall of the Painted Hall, Thornhill combined the contemporary with the allegorical, showing George I with his extensive family. At the bottom of the steps in this scene, on the right-hand side, you’ll find a gentlemanly male figure with his back to the column, turning to face us. It is Thornhill himself – he has included his own portrait in close proximity to the royal family. The West Wall wasn’t completed until the 1720s, by which time Thornhill was Sergeant-Painter and had been knighted.

Thornhill shows himself gesturing towards the King: this and the red sash he wears are perhaps intended to draw attention to the status bestowed upon him by the monarch. His ‘tools of the trade’, including a palette and paint brushes, are shown next to him.

Thornhill’s public role in society would have become more prominent after the conferring of his knighthood in 1720. In the same year he was made Master of the Painter-Stainers’ Company; in 1722, he was elected MP for Melcombe Regis and Weymouth, a position he held for the next 12 years; and in 1723 he became a Fellow of the Royal Society. These are the years when he was, for a short period at least, the most celebrated British artist who had ever lived.

His success enabled him to purchase the old family manor in the south of Stalbridge, Dorset, which had been lost to the family when it was sold in 1686.

Thornhill seems to have always had a genuine wish to encourage the study of painting in England. He had a plan to found a state-supported academy, which he never successfully realized, but he managed to establish his own drawing school, opening up a room of his own house in Covent Garden. It was here that William Hogarth was to study and where he first met Thornhill’s daughter, Jane, whom he later married.

Thornhill’s success and ambition made him enemies and he was passed over in favour of the English artist William Kent for the decoration of Kensington Palace in 1722. Thornhill blamed the influence of Kent’s patron, the Earl of Burlington. In the late 1720s, just ten years after he had reached the top of his career, Thornhill’s star had waned. He received no more commissions and, although he did not have to worry about money, this must have caused a severe blow to his self-esteem.

Thornhill’s death in 1734, aged 59, ended the epoch of grand Baroque decorative painting in Britain. Nevertheless, for the two decades spanning the creation of the Painted Hall, he had achieved a level of success that had exceeded that of any other English artist before him.

Take a Virtual Tour of the Painted Hall, and head for the West Wall in the Upper Hall for a close-up encounter with Sir James Thornhill!