Greenwich in the time of the Victorians: A Dickens retrospective

Contributed by Jacob Duffell, at the Old Royal Naval College.

Like any good author, Dickens used his life as inspiration. He visited Greenwich throughout his life and it means he left behind a trail of references. Apart from visiting The Greenwich Fair when he was young, Dickens had several celebratory dinners in the area and visited his parents when they moved to Blackheath and Lewisham. This local knowledge is evident in his writings. One biographer notes Dickens’ nostalgia for Greenwich: ‘His characters, like Dickens himself, leave town in order to feel better. They go to Blackheath, or Greenwich’.

Even a contemporary critic can see Dickens’ ‘admiration for the frightful little arbours at Battersea or Greenwich’. Today Londoners share Dickens’ fondness for the area – a quick glance at house prices will tell you that! But this critic seemed a little sneering, so perhaps Dickens’ positive view was not universally held. Knowing Dickens he would not have been concerned either way! 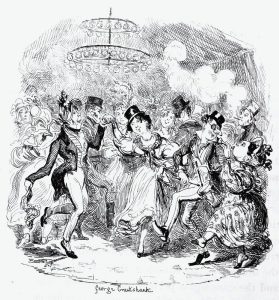 The most overt reference to the locality is the feverish fun of short story Greenwich Fair: ‘If the Parks be ‘the lungs of London,’ we wonder what Greenwich Fair is—a periodical breaking out, we suppose, a sort of spring-rash’.

Dickens often used to look back with fondness at his formative years, and his account of Greenwich Fair is no different. The semi-biographical character of Boz was ‘a constant frequenter of Greenwich Fair’ in his youth. The vivid scenes of revelry and jocularity create an atmosphere of festivity.

Of particular note are ‘the old pensioners, who, for the moderate charge of a penny, exhibit the mast-house, the Thames and shipping’. The pensioners often supplemented their meagre allowances by guiding tourists and charging them for use of their telescopes. The Easter Fair must have been an ideal opportunity for them! The fair was also an opportunity for criminals and was described as a ‘common bed of licentiousness, ribaldry and vice’. This is exemplified by the fact that at Greenwich Fair in 1835, a 13-year-old was caught stealing a handkerchief from the pocket of a gentleman in the crowd – a possible inspiration for Oliver Twist character, The Artful Dodger? Maybe. So due to its bad reputation , The Fair was not to last and within Dickens’ own lifetime it was banned.

The decline of The Fair mirrors that of The Greenwich Hospital, which by 1850 had spaces for the first time in its history. Just under 20 years later in 1867, with only a handful of aged men left, the Hospital closed its doors.

The spirit of Greenwich continued but The Trafalgar pub is one of the only surviving reminders of this period, so spare a thought for that bygone time of ‘ribaldry and vice’ next time you are enjoying your after-work pint! 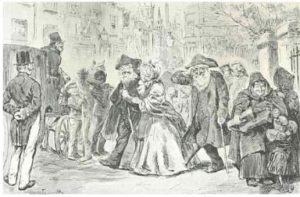 We know from characters like the roguish John Worley that the pensioners were interesting individuals. They clearly left an impression on Dickens, who vividly describes in The Uncommercial Traveller a pensioner with a ‘chequered career of blue water, black gunpowder, and red bloodshed for England, home and beauty’. This womanising pensioner had a visible effect on ladies, as whenever they blush it is obvious ‘without looking round that a Greenwich pensioner has gone past’!

In Bleak House, Dickens describes an atmospheric scene passing along the Thames: ‘Fog in the eyes and throats of ancient Greenwich pensioners, wheezing by the firesides of their wards’. Could Dickens have been inspired by one of the centenarian pensioners that resided at the hospital? 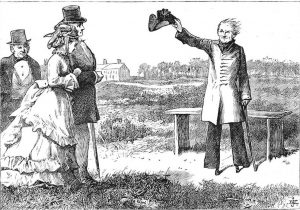 In Our Mutual Friend , Dickens describes a wedding at St Alfege’s officiated by the jokingly titled ‘Archbishop of Greenwich’. It is witnessed by ‘Gruff and glum’ – the nickname for a ‘charming old pensioner’. This affable veteran has the ‘gallantry of a man-of-warsman and a heart of oak’.

The pensioners are shown to be active – if not busy. Dickens’ varied portrayal of the pensioners as old, brave and charismatic is a positive one, imbued with respect. It is a useful insight into how the pensioners could be perceived in their own time: as veterans and not as a monolithic group with ‘listless idleness and mental vacuity’ as described by contemporaries. 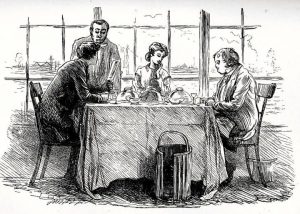 The crowning success’: The wedding dinner in The Ship

After the wedding, the characters of Our Mutual Friend go on to dine at ‘The Ship’ – a tavern Dickens himself frequented – and may have met some of the pensioners there. This pub, near Greenwich Hospital, was destroyed in World War II. Dickens had several dinners in Greenwich with friends such as J.M.W Turner. 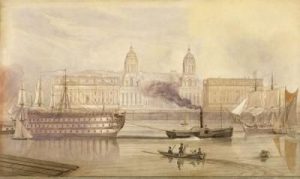 The Dreadnought Hospital being towed away (1871)

The Dreadnought Hospital was a floating medical centre moored just off Greenwich Hospital between 1821-1870 and had the noble aim of treating all seamen. In Dombey and Son, Captain Bunsby is described as having ‘had more accidents happen to his own self than the Seamen’s Hospital to all hands’. This is a reference to The Dreadnought Hospital, which Dickens visited as a reporter when it first opened in 1837.

Nearly 15 years later, another account of The Dreadnought Hospital appeared in his weekly magazine Household Words. The author highlights the irony of healing sailors in a war vessel: ‘There, within the bulwarks originally built for the purpose of smashing kind at large, they get tenderly doctored and nursed’. The article is realistic about the conditions but mainly positive about the Dreadnought, recognising how ‘clean and orderly everything was’.

From Bleak House to Sketches by Boz, The Uncommercial Traveller to Our Mutual Friend, London’s literary legend had a soft spot for Greenwich – frequently featuring the area in his stories. Greenwich is portrayed as an area of leisure and the pensioners are key to this image as mischievous but honourable characters. Entertaining as the stories are, the fact that Dickens clearly used his own experiences means they also provide an invaluable source for creating an image of the period. 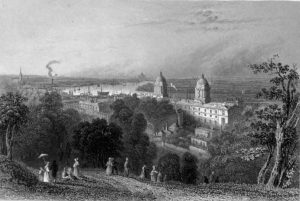 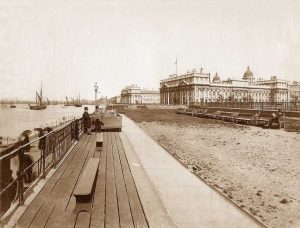 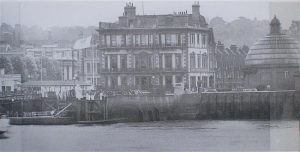 Where’s the Cutty Sark? ‘The Ship’ Tavern that Dickens would have frequented, 1937 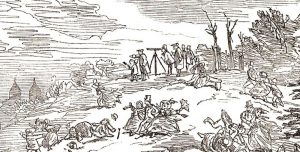 Telescope set up by Greenwich Pensioners near the Observatory (1853)