The Old Royal Naval College Chapel was the last major part of the Royal Hospital for Seamen to be built. Designed by Sir Christopher Wren and completed by Thomas Ripley, it was finally finished in 1751. The naval veterans who lived at the Royal Hospital, known as Greenwich Pensioners, were obliged to worship in the Chapel daily.

The Chapel at the Royal Hospital for
Seamen, Greenwich, before the fire of 1779

Disaster struck on 2 January 1779. The Annual Register for 1779 described what happened: ‘At six o’clock in the morning, a dreadful fire broke out at Greenwich Hospital, which burnt most furiously. At ten o’clock the chapel (the most beautiful in the kingdom) .. [was] entirely consumed’.

The water tanks at the top of the building had been almost empty and all the Pensioners could do was form a human chain to haul buckets of water from the Thames. The heat, smoke and sound of crackling coming from the fire would have been intense. At about eleven o’clock fire engines arrived from London. Other parts of the Royal Hospital were also threatened: ’The fire raged for several hours with unrestrained fury… the west wing, in which is the beautiful painted-hall, was in great danger, as the wind set that way’. The fire was got under control by the evening.

The fire had broken out at the rear of the Chapel, underneath the tailor’s workshop which produced the Pensioners’ uniforms. There was a suspicion that over-enthusiastic New Year celebrations were to blame: ‘the men had been at work the preceding day, but had mingled holiday rejoicing too much with their labours’.

Luckily, the destruction was not total. As well as the interior of the Chapel, several of the wards in which the Pensioners lived were also destroyed. But the cupola still stood, although burned internally, with staining which is still visible, and the fire had been prevented from spreading along the rest of the building by cutting away the roofs and floors.

The Chapel interior that had been destroyed was far plainer than the one we see today, with a flat ceiling and an apse behind the altar. There were no pews for the Pensioners to sit on, they were expected to stand throughout the daily service! The fire left behind little but the stone shell of the building.

James ‘Athenian’ Stuart, Surveyor of the Hospital, was asked to design a new Chapel, which took over ten years to complete. Stuart brought with him a team that included many of the finest craftsmen of their day. A new organ for the Chapel was built by Samuel Green and the eminent American artist Benjamin West was commissioned to create a painting for the altar, showing St Pauls’ shipwreck on the island of Malta. In the meantime, the Pensioners attended services held in the Painted Hall.

The interior was redecorated in the ‘Greek Revival’ style. Following extensive restoration in the 1950s the Chapel now looks almost as it did when it reopened after the fire. In 1955 it was dedicated, as is traditional for naval chapels, to St Peter and St Paul. 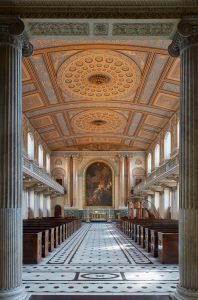 The Chapel today – you can
join our weekly services
online here